The concert of most popular Scottish rock band Simple Minds, will be held 5th May, on one of the most beautiful beaches in Split, beach Žnjan!

After recently released 17th album “Walk Between Worlds” and sold-out concerts across Europe which are held as part of a tour of the same name, the city of Split and MPG are pleased to announce a Live concert of the most popular Scottish rock the band, the Simple Minds. The concert will be held on one of the most beautiful beaches, beach Žnjan on 5th May 2018!

This will be the their sixth concert in Croatia, and they are coming back to Split after a full eight years when they performed in the Spaladium arena. This way Simple Minds will mark the most important and largest of the split festivities, Saint Duje celebration, scheduled as usual 7th May 2018. Live Simple Minds spectacle will be the first major event on the beach Žnjan scheduled soon to get a new modern look and concept.
Let’s rock! 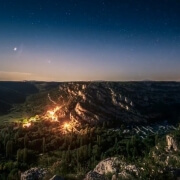 Three years filming of National Park Krka, only at night - the result is an amazing time…

Restaurant Week to Start Across Croatia

Three years filming of National Park Krka, only at night – the result...